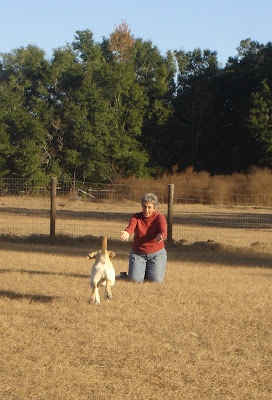 Last weeks homework was for you to reward your dog many times for looking at you whenever you said his name. You see, if you say your dog’s name and he does not even turn to look at you, there is no point in calling him because he is NOT going to come; so you are just practicing the wrong behavior over an over.
I like to teach my dogs to come by playing a series of games. This not only makes it fun for both of us, but it also teaches him that coming to me is better than any other thing he is doing. When competing with very distracting stimuli, like a squirrel, or the neighbors horses, dogs or cats, I really need to make it worthwhile for him to stop the chase and want to come to me. Fun games are a great way to do this.
One of the first games that I play with Oliver and Amelia is called a restrained recall. I ask someone to help me by holding one of them by the collar ( I use a buckle collar, not a choke collar or any other type of correction collar), while I run away from him hooting, hollering, waving and acting very silly. At this point he is pulling trying to break way from the person holding him to chase after me. I will then turn around, kneel down and call him “Oliver COME! My helper will now let him go and he will come like he has been released out of a sling shot, running full speed towards me. All this time I will be praising and smiling. When he gets to me I pat him, shower him with praise and also give him super yummy treats.
We can usually repeat this 3 or 4 times allowing me to increase the distance that I run away from him. Since we live on a farm, my dogs can wander a few hundred feet from me, so I make it point to practice right from the beginning to come to me from a good distance.
I will continue to practice giving him a treat whenever say his name and he LOOKS at me; this is really the first step to a truly reliable recall, if I can get his attention, I greatly increase the probability of him actually coming.
Stay tuned for more games!