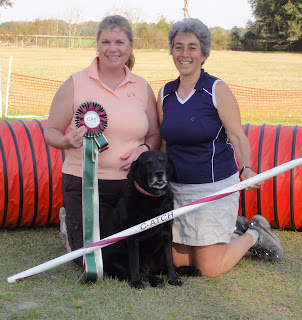 We did it! Sabrina and I finally got our long awaited CATCH (CPE Agility Trial Championship).
For those of you who are not that familiar with the Agility jargon, a CATCH involves getting at least 94 qualifying runs in at least 3 different levels (ascending in difficulty) in 7 different classes. When you get your CATCH, you are awarded a humongous rosette and a bar. Yes a PVC bar just like the ones that are used on the jumps. You run a victory lap around the ring holding your bar and afterwards all your friends sign it. I know, it sounds silly but it is a huge thrill!
Since Sabrina celebrated her 10th Birthday last September, she was experiencing the normal slowing down and “creaky” joints; so for the past year we had been doing limited showing just competing in one or two classes instead of the usual five per day that are the norm at CPE agility trials (CPE stands for Canine Performance Events, one of several organizations that offers agility trials).
As would be expected, the closer we came to earning our title, the more elusive it became! I lost track of how many “almost perfect” runs we had where one little mistake, usually my fault, would cost us the coveted “Q” as we call a Qualifying run. I must admit that some days I just wanted to throw my arms up in desperation and quit. To add on to the stress, Sabrina started being lame on and off because of a cronic injury that I think is related to her jumping a gate to get to the store and steal samples of dog food. Typical Sabrina…We keep several different samples in baskets under a table and she just picks the Pheasant and Brown Rice! So now we are adding quiropractic adjustments, accupunture, Chinese herbs, massage, supplements, icing, you name it we have tried it!
Now for Sabrina, it was a different story. She could not care less how many “Q’s” we were missing or if we got that big rossette or not. I don’t think she even cared if she had pain or not. After watching me run with the other dogs and loudly voicing her objections, she was so happy to be let our of her crate… it was finally HER turn. Probably the fondest memory that I have of competing with her is how many times people I don’t even knew came up to me and said: “She looks SO HAPPY running out there with you.”
So when the thrill of the win is over and the photo and rosette have faded, my heart will still be joyful for the happy runs we had together. Sabrina, you are the BEST!